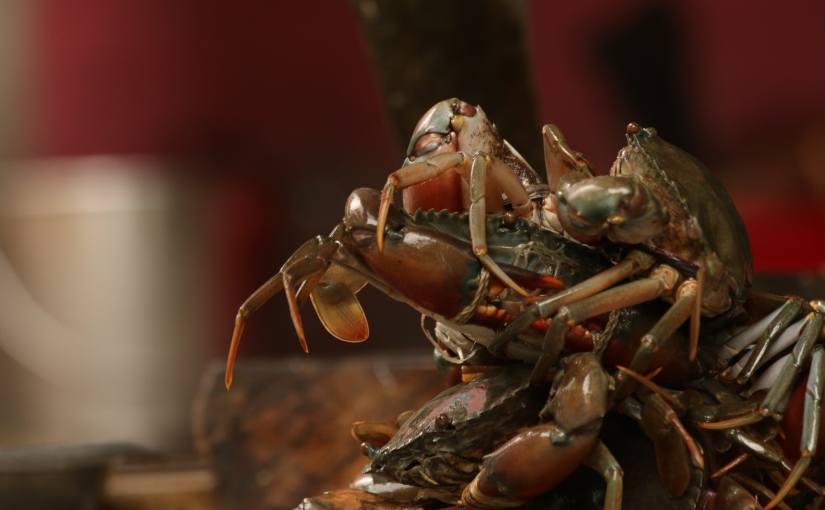 The A great hunt is underway for the Mudcrabs in the Sundarban, world largest mangrove forest. Once just another scavenger in the forest, but since last decade the Mudcrabs are now known for their ‘export-quality’ flesh down here.

From the mudflats, creeks, canals, and rivulets of Sundarban, Mudcrabs are being exploited on an unprecedented scale, to be exported, alive; much to the delight of crustacean loving South East Asians- mainly the Chinese restaurant goers.

During some of my recent trips to the forest and impact zone, I’ve taken following notes on this;

A. The thriving crab fishery emerged as almost a Hobson’s choice for the local communities hard-hit by shrimp aquaculture and climate change. Sundarban dependent poor communities were already struggling hard to cope with disappearing livelihood options in the face of increased salinity, losing agriculture, declining fish stock and repeated floods and cyclones. So when the south-east Asian demand for seafood delicacy knocked at the door, the local traders took the opportunity.

Take Munshiganj for example, a Union under Shyamnagar Upazila of Satkhira district. Once a quiet fishing hamlet tucked away on the bank of Kholpetua river of Sundarban, Munshiganj is now one of the busiest crab trade zones in the country.

B. This is not a subsistence or artisanal fishery of local fishing families anymore. exploitation of mud crab is  Poor workers from the north-western regions are migrating seasonally to join this force of fishery workers. It’s easy to start now, as the buyers provide boat and gears with a lump sum of the cash. The newly turned fishers just need to go in with a permit from Forest Department and collect literally whatever they can get.

Satkhira district provides at least thirty percent of total Mudcrab extraction for export. Parulia bazaar is the main crab trade center of the district. On many occasions, I’ve talked to leaders of Parulia Crab Processing Traders Association. According to their account, they process seven to nine tonnes of Mudcrab in Parulia.

In every evening on an average of two truckloads of live Mudcrabs leave for Dhaka, where they wait for maximum two days, then hitch a ride on air cargo to be served as delicious dishes in China, Thailand, Singapore, and Malaysia.

C. And it does not look like that, policy-makers have any idea about what is going on. Of course, it is not formally recognized as a ‘fishery’. The Forest Department sees it another ‘forest produce’. They just issue ‘permits’ for crab fishing in exchange for very little fees, as many ‘permits’ as the businesses want them to do. The other government agencies related to export promotions are keeping the record on how much foreign currency the crab exporters are earning.

D. Coastal regions of Bangladesh have very bad experience with another 100% export oriented industry; shrimp farming. Ecosystem balance and livelihoods in the coastal zone have been devastated by unsustainable shrimp farming in the last few decades. Thousands of hectares of Mangrove forest was cleared for shrimp farming in the Chakoria Sundarban region. In the western coast, shrimp farming is responsible for loosing for agricultural lands and salinity intrusion. And now, this wild crab fishery is just like the historic Burma-teak rush.

Back in Dhaka, I’ve talked with many government officials and exporters. But none them are planning anything to bring sustainability in the wild crab fishery.

Conservationist and communicator based in the Bay of Bengal region. View all posts by Md Kutub Uddin